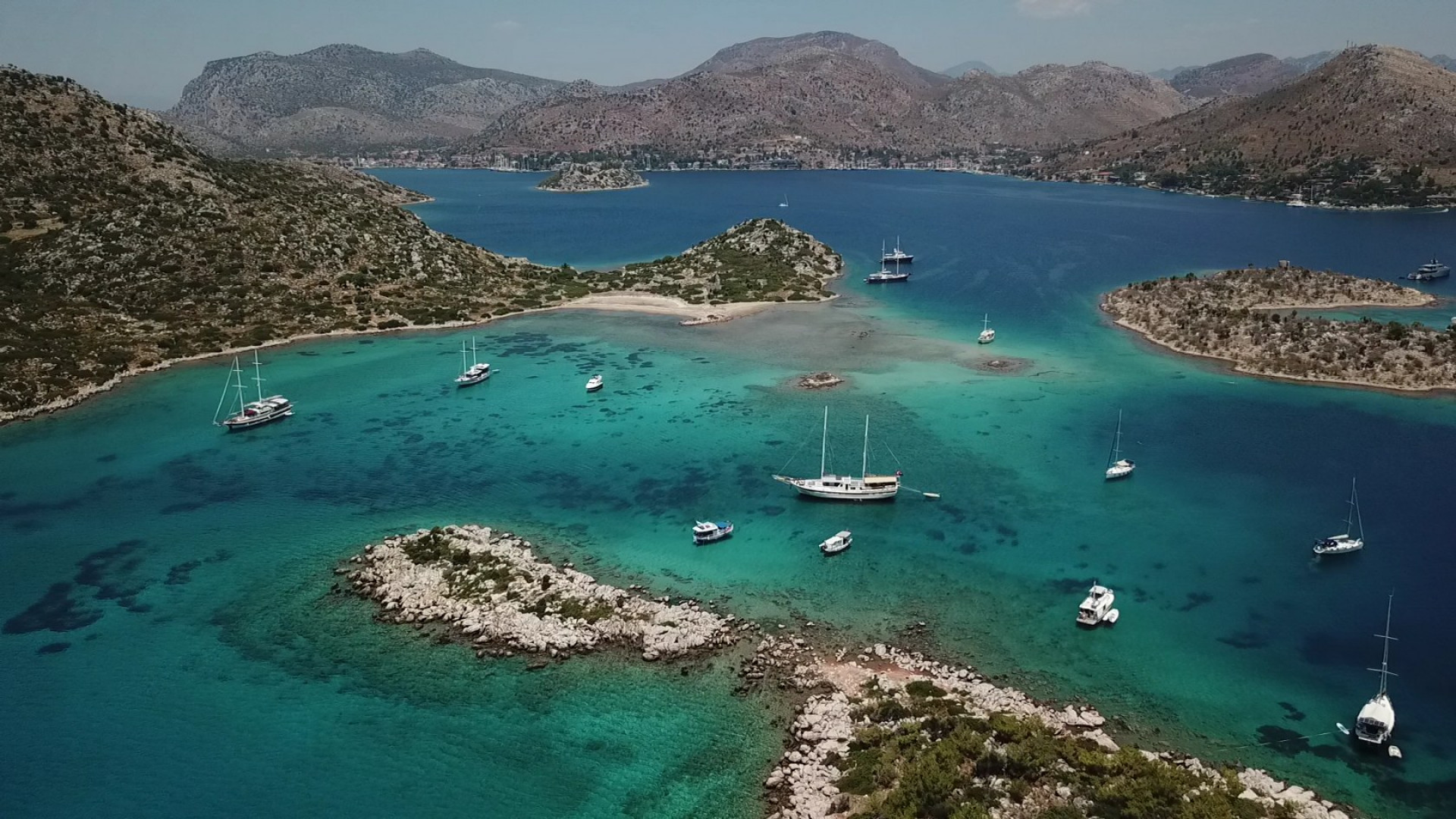 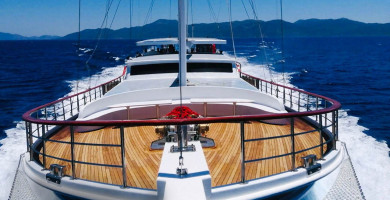 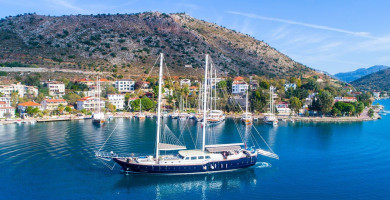 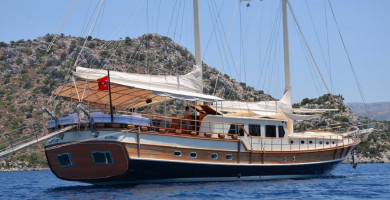 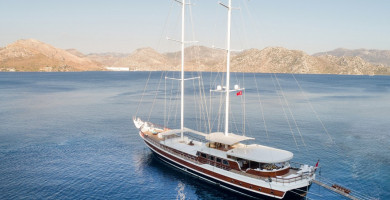 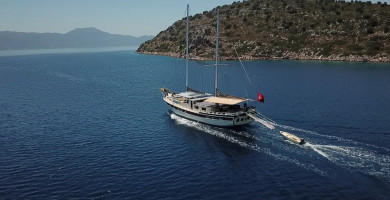 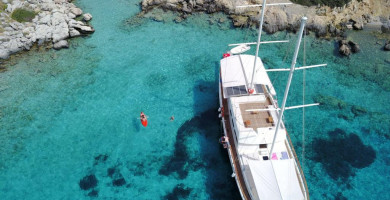 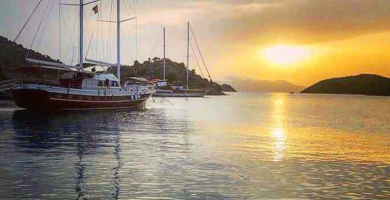 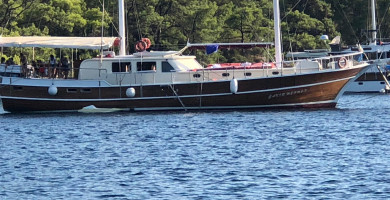 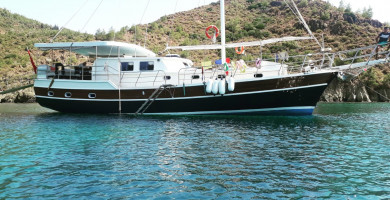 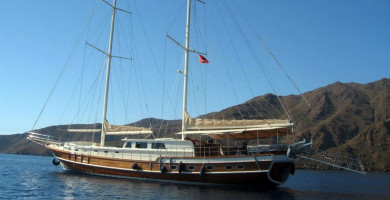 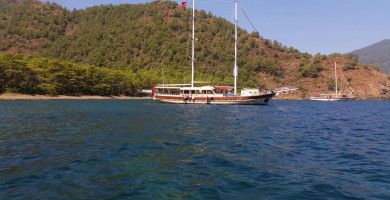 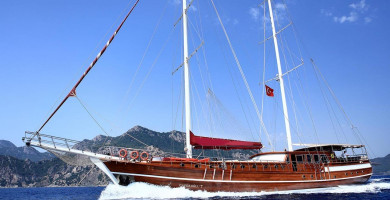 Nostalgic like an old folk song, standing the test of time and feels familiar like an eidetic image of a random place remaining from childhood.

The chirping sounds of crickets, the sweet scent of flowers blowing through the pine trees with a gentle breeze, blending in with beachside hamlets and yachts drifting in and out of sleepy coves. All in unison with the droughty territory with thousands of years of history.

Surrounded by orange and lemon trees yet floating shelters known as Gulets rising in the gardens of the locals.

Bozburun is a forest of Gulets in all lengths, beams, and colors. The symphony of ship construction sounds, the smell of varnish and dust from sandpapers are the essence of this small village and it is simply part of their daily routine. As the village has a craggy, rocky landscape and infertile farming ground, the locals started living off the sea, and consequently, ship construction developed over the years. Today, it is a craftsmanship that inherits from father to son and the main source of income for the locals.

Situated on the southwest coast of Turkey and giving its name to the peninsula, this little seaside village is the main port of call for voyagers with its fascinating scenery and crystal clear waters.

This captivating slice of paradise is one of those places that has managed to stay off the radar of mass tourism and effortlessly provides an exclusive and ever-elusive experience to its visitors that is getting harder and harder to find. However, being a Gulet homeland, a harbor, and a stop-off point for the yachts that is, Bozburun has already achieved recognition by the local visitors and now taking its first baby steps towards becoming a Blue Voyage base and destination.

Bozburun Peninsula was once called "Trakhei" or ''Trakai'' (meaning craggy, stony ground) and in the recent past, Bozburun has been called "Bosprina", named after the most prominent settlement and port of Trakhei.
The oldest known name of Bozburun, which existed as a settlement in ancient times, is "Tinos" or "Tymnos" and was one of the district capital of the Rhodes Confederation in southwest Anatolia. Although it is estimated that Bozburun is located 3-4 km southeast of the city, historians could not agree on its exact location.

Bozburun is located in the borders of the region known as Caria in ancient times, which has been the home of many civilizations throughout history.

In the north-east of Bozburun and referred to as ‘Castle Hill’ (Asar Tepe) by the locals today, was once the city of Larymna and its ruins have remained to the present day.
The people of the region were called 'Sand People' which gave the city its name deriving from the word 'Larymna' and meaning 'People of Sand' in Luwi or the Carian language.
Although there are remains of castle walls and tomb ruins from Larymna today, these are far from providing sufficient information about the ancient history of the city. However, Lelegian archetype walls and the remains of a rectangular bastion encountered on the slope of the Acropolis gate provide us a clue about the timeline. According to Herodotus, the native population was Lelegians in Aegean Region around 1200 BC.

There are 10 known historical cities on the Bozburun peninsula.

Located 20km from Marmaris-Datça road, ‘Bybassos has a castle that is thought to have remained from the middle ages.

In "Hygassos" between Orhaniye and Turgut villages, remains of the city walls dating back to 2000 BCE can be seen.

"Kastabos", on the other hand, is a holy city established on the plain of Mount Eren. It means "Temple Plain" in the Carian language. There is a health cult belonging to the goddess 'Hemithea' and a large marble platform on the top of the mountain. Since no archaeological excavations have been made yet, it is not open to visitors. In ancient times, this place was a temple belonging to the goddess Hemithea, who gave healing and was a sacred place of visit.

'Syrna' is a small city located where the village of ‘Bayır’ is today. The settlement gained fame with the temple of Asklepios (god of health) in the Hellenistic age. Although there are no remains from the temple today, some parts of the city walls and the basic remains of several buildings can be seen. The stone in front of the mosque in Bayir Village is one of the pieces that remained from the temple.

'Thysanos' is located in Söğüt Village and its surroundings. Although the existing traces only consist of a few pieces of walls, Experts consider that there is more than what the eyes can see and it is all lying under the ground and will only be unveiled with excavations.

'Kasara' is located at the southern tip of Bozburun Peninsula, right on the shore of Serçe Port and the name ‘Kasara' means 'Big Beautiful Village' in the Carian language. In the Hellenistic age, just like neighboring ancient cities, it became a city center under the Rhodes State. It is possible to come across ruins from the Hellenistic, Roman, and Byzantine periods.

In 334 BC, Alexander the Great accommodated his navy in the port of 'Phoenix' during the Eastern Campaign according to the historical records.

In 120 BC, The city was invaded by Alexander the Great and remained under the rule of the Roman Empire.

In 395 BC, it came under the rule of the Byzantine Empire.

In the 12th Century AD, Mugla province and Datça and Bozburun Peninsula were ruled by Seljuk Empire.

In the 13th Century AD, A member of the Anatolian Union, the Beylic of Mentese was ruling the southwest of Turkey including the Bozburun Peninsula.

In the 14th Century AD., The region joined the Ottoman Empire.

In the 20th Century AD, the town became a part of the Republic of Turkey

In 1923, after the conquest of Anatolia, Turkmen migrations first reached Marmaris and then Trakhei via the Taurus Mountains and resumed their lives alongside other ethnic groups living in the region. After the population exchange realized with the Lausanne agreement, the only inhabitants of the town were Turkmens.

Bozburun is now a town and its municipality was put into service in June 1992.

While You Are Here

Bozburun Type Signature Gulet Design (Square Sterned Structure)
The gulet history of the region goes back to 30-35 years.
The most basic feature that distinguishes 'Aynakıç' gulets from traditional gulet design are the stern sections are not round as in the gulets, but a raised angular structure. Generally, this area is used for the suite room that is defined as a 'master cabin'. Except for this feature, all other details are the same with gulets.
Before the arrival of Gulets, locals knew only two types of boats; the sponge diving boat called Trandil (Tirhandil), and the fishing boats called 'Piyade' in Turkish, in translation to 'infantry' referring to the abundant numbers of fishing boats.
At first sponge diving made most of the male population of Bozburun love the bottom of the sea rather than above. Indeed, whichever diver you talked to, they referred to the sponges as "black roses of the sea". This is not just a romantic word. The sponge is black at the bottom of the sea and when it comes out of the water, they pound the sponge and drain the jelly-like fluid. After the draining process, the intoxicating smell disappears and the sponge takes its natural yellowish color.
According to the stories of the locals, the first gulet masters came to Bozburun from neighboring Greek island Symi and taught this art to the townspeople.
After they learned how to construct a ship, the first primitive examples of Gulets started rising in the gardens of the locals as they did not have a specific place or organized zones.
What started as a necessity, flourished into advancement and the biggest economic value of the region over the years.
Gulet construction is described as an art form and today, the people of Bozburun carry this art teaching of their ancestors from one generation to the next.
The shipbuilding yard makes a great contribution to the development of Turkish tourism with its 183 gulets registered in the central port in 2004 (all of them were built in Bozburun). Bozburun is trying to keep up with the demands from all over the world today.
Blending the best quality of the gulet with the efforts of its craftsmen and workers. Those shipyards are never empty. Gulets are equipped with the latest technology. These boats, enriched with all kinds of possibilities from radar to air conditioning, are known for their very comfortable and high quality. The people of Bozburun not only produce gulets but also operate them. These sea people, who know maritime well, work in touristic regions such as Marmaris and Bodrum and give examples of quality tourism in our country with their experience in this field.
Bozburun gulets are all different from each other. The uniformization of mass production, which is a negative result of our globalized world, is not seen in the gulets produced in Bozburun. Because they are products of human sweat, labor, experience, and creativity. Because they are all works of art.

Ship Biscuit (Hard Tack)
Known as Pesimet or Peksimet in Turkish language, Ship Biscuit is a simple type of biscuit or bread commonly made from flour, water, and sometimes salt in Bozburun and its surrounding villages and has the prolate spheroid-shaped dough nicked with a wooden stick before placed and cooked in stone ovens.
Ship Biscuit is inexpensive and long-lasting. It is used for sustenance in the absence of perishable foods, commonly during long sea voyages and in times of poverty.

Gulet Festival
International Bozburun Gulet Festival is an annual event in the town and it is held every October, It is a prime spot for sailing and diving with its winds and year-round clear sea.

Canoe Festival
Every year on June 12th the locals from the village and neighboring villages held a Canoe Festival since 2017. The winners are awarded with medals and cups.