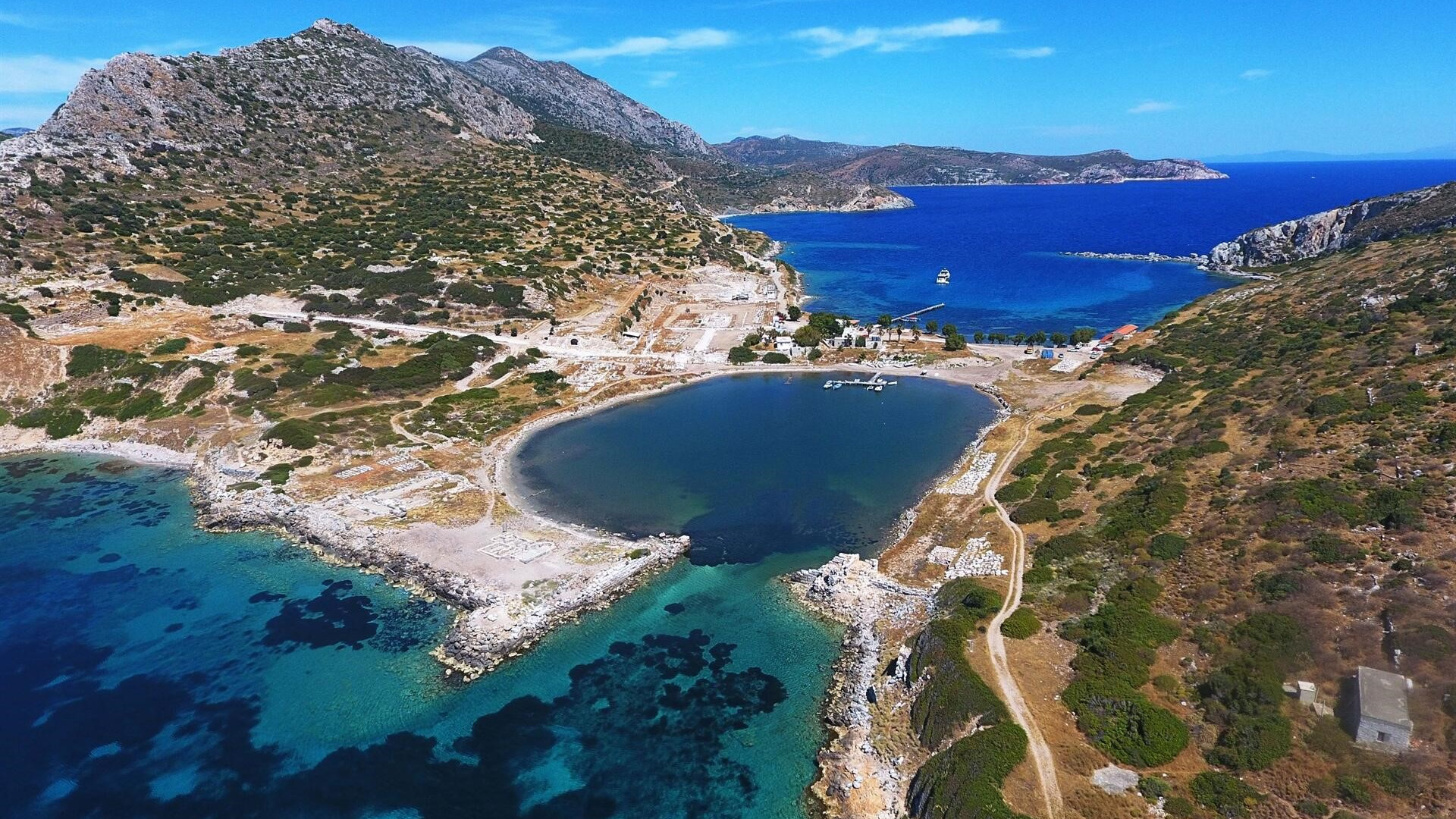 Craggy, a sliver of pine-crested hills and deserted beaches jutting into the Aegean, endless olive groves, empty ravines, coves with every shade of blue, vast sweeping bays, the air scented with thyme, rosemary, and sage, and sleepy villages with goats on the road and old men tinkering with their prayer beads in vine-covered cafes. Datça offers a mirage of genuine tranquility amid the buoyant resorts of south-west Turkey.

Datça has successfully managed to maintain itself as a pastoral Aegean port town without the inflow of mass tourism and its consequent formless and absonant structures. The inhabitants of Datça are clearly opposed to tourism that is not in tune with the natural surroundings and has therefore only supported the openings of small inns and boutique hotels. The result is a collection of traditional settlements, newly built accommodations that are small and in harmony with their surroundings. Its distance from airports and bad road access has left it unspoiled. Yet, city-weary visitors do come and spend a few days in new hotels but most visitors come from anchored off-shores as they make their shortstops on gulet cruises.

The ancient Greeks believed that the God of Olympus, Zeus personally created Datça.

The geographer Strabo supposedly said: “God sent his beloved creatures to Datça for them to live longer.” That is taken seriously by the Turks as they buy their holiday and retirement homes in Datça.

A Brief History of Datça

Although early Archaic and Classical periods remain a mystery, the history of Knidos dates back to 3000 BC.
According to historian Herodotus, the native population was the Leleges and the Lelegians were the aboriginal people of the Aegean region before the Greeks arrived.

By the end of the 2nd millennium BC, the course of history has changed significantly with the arrival of a tribe into the region, and the leader of the tribe was called Kar.
The nomadic people of ‘Kar’ settled in the southwestern part of Anatolia, between the Menderes and Dalaman Rivers, and the region was called ‘Karia’ or ‘Caria’ named after its leader, meaning the land of Kar.
However, Historians associate Carians with Lelegians, considering them as the descendants of Leleges who had preceded in the region and continued to exist as part of their society in a reputedly second-class status. The Carians also considered themselves that they were Anatolian mainlanders intensely engaged in seafaring and were akin to the Mysians and the Lydians.

In the 14th and 13th centuries BC, Mycenaeans also settled here, attested by the unearthed ceramic artifacts during extensive excavations, and the name Knidos is considered to come from those times.

In the 12th century BC, according to Herodotus, Knidos was colonized by the Lacedaemonians (Spartans).

By the 11th century BC, The Ionian and Dorian Greeks colonized the south of the Carian region and joined the Carian population, forming Greek-dominated states there.
According to historians, Knidos was rebuilt in the 11th Century BC by the Dorians, who first migrated from the north to the nearby islands, then later settled in the mainland.
Dorians also established the Dorian Hexapolis with the cities of Cnidus (Datça), Halicarnassos (modern Bodrum), and the Greek Islands Cos, Kamiros, Lindos, and Ialissos (the last three were in Rhodes). Cnidus was also the center of this City Union. It had quite an effective political and economic structure considering the period.

In the 7th century BC – Time of prosperity and power – The city appears to have achieved great wealth and major creativity as they donated a treasury at the sanctuary of Apollo in Delphi. This building, designed to hold offerings to the deity, was revolutionary in many regards. It was the first such structure built at Delphi, and one of the first full marble structures in Greece, but moreover, it was the first building in mainland Greece to use caryatids instead of columns for its porch.
To the Greek visitor of 550 BC, the sight of the Cnidian Treasury must have been astonishing, exotic, innovative, and luxurious, and there can be little doubt that this was its creators' intention, a reflection of how they saw their city and its place within the Greek World.

In 546 BC, Cnidus was attacked by the Persians during their invasion of Anatolia. In defense, the Cnidians tried to separate themselves physically from the mainland by digging a channel through the neck of the peninsula (today Balikasiran). Unfortunately, the rocks were very sharp and hard. Many Cnidians were injured as a result and an envoy was sent to question the oracle at Delphi. According to the oracle, Zeus did not approve of their work and the Cnidians abandoned their project. The Persians entered the Peninsula without any resistance and were greeted peacefully by the Cnidians.

In 360 BC, Cnidus was moved to its current location from Datca, while it was still under Persian rule.

In 334 BC, The Persians were driven out of Knidos by Alexander the Great.
After Alexander died in 323 BC, there was a struggle among various powers to control the city. For a while, it was ruled by the Ptolemaic Dynasty of Egypt and later by Rhodes.

By the 4th century BC, the city was a well-known metropolis and Cnidus reached its peak during the Hellenistic period until the emergence of the Roman Empire, as signified by the Battle of Actium in 31 BC and the conquest of Ptolemaic Egypt the following year. Knidos did not resist the expanding Roman empire; it peacefully became part of it.

In the 7th century AD, it was invaded by the Arabs. The Arabic scripts at a church floor here provide ample evidence for the presence of the Arabs. In the following years, the sea access of Knidos, which helped to the rise of the city, also caused its demise. Knidos was attacked by pirates and destroyed extensively by a sequence of earthquakes. Eventually, the Cnidians abandoned their city as a result of the pirate attacks around the 8th Century AD.

In 1220 AD, Beylic of Mentese (the frontier principalities established by the Turks) conquered Datça.

In 1390 AD, Sultan Yildirim Beyazit attacked the Mentese Principality and the Peninsula passed to the Ottoman rule.

In the 18th century, During the reign of sultan Resad, the name of the Peninsula was changed to "Resadiye".

After the Turkish Republic in 1923, the Peninsula regained its old name of "Datça".

Today, Datça is a district of the province Mugla and is located 70 kilometers west of Marmaris.

While You are Here

1. Hit the beach
The peninsula has coves, bays, and beaches in abundance. Sandy or shingly, they all share the same, alluring, crystalline turquoise waters. Often the water remains shallow for some distance offshore, making it safe for young children. In the quiet village of Orhaniye, there’s an elongated sandbank you can walk on, out into the bay. East of Knidos, the charming fishing village of Palamut Bükü is known for its fish restaurants and its 2km-long beach. Kargi is a simple rustic idyll with a few vine-shaded cafes and a clutch of pensions on a shingle beach, and the tiny villages of Hayıtbük, Kızılbük and Ovabükü, triple bays in a row, are becoming places to spend a day on the beach.

2. Hidden Gem
Domuzbükü, which translates as ‘Pig Inlet’, is a lovely turquoise bay which can only be reached by boat. A favourite stop on the famous Blue Cruise, so find a gulet (yacht) to take you there.
Once the peninsula’s main village, Eski Datça (Old Datça), lapsed into obscurity in the late 20th century. Now it has been partially restored by second homers from Istanbul, Ankara and further afield. It’s a beautiful patchwork of stone-paved lanes, kitchen gardens, pot plants, bougainvillea-drenched walls, and little cafes and shops. Drop into the old stone house of the late poet Can Yücel. In his poem, Testament, he wrote: “Bury me, my dear, in Datça. Near that view by the sea.”

3. Day-trip to Symi
Just 50 minutes to the south by boat from Datça town, Symi is the closest Greek island and makes for a winning day trip, partly because of the contrast between its neo-classical beauty and Datça’s rustic vibe. In the 19th century, the island flourished on sponge diving and boat building and many elegant homes were built. It’s a wonderful place for walking and discovering secret corners and houses with faded beauty. Boats leave from Datça town’s main harbour, or you can book a trip through any hotel.

4. The City Center
Parallel to the main street, you’ll find the Kumluk Yolu (Sandy Path), where locals and tourists stretch out and enjoy the sun and sea until the evening, after which the many cafes and restaurants begin to fill up. Make sure to drop by the nearby Sanatçılar Sokağı (Artists Street) where local artists set up shop in the evening to sell their handicrafts. At the end of this main avenue, you’ll find Datça’s port, which is especially beautiful at sunset and you can take a seat at one of the many cafes and restaurants to enjoy the view and even stay a bit longer into the night at one of the bars. Another important sight in this area is the Ilıca Gölü (Ilıca Lake), a small freshwater lake filled with fish and ducks. One of the area’s most popular beaches is the Hastane Altı Plajı (Beach below the Hospital), with a name that harks back to the time when Datça’s State Hospital used to be situated here. After spending a few hours strolling by the beaches, taking a swim, and lying in the sun, make sure to visit the city center’s up and coming neighborhood, Ambarcı Caddesi (Storekeeper Avenue), where you’ll find some excellent bakeries, cafes, restaurants, and taverns.

5. Old Datça
The old stone houses of Datça’s historic neighborhood have become quite famous, especially because the renowned poet Can Yücel lived and died here and his house is open to visitors annually on August 12th (Yücel’s death anniversary). Spend some time wandering around this beautiful neighborhood, where the old stone houses are covered in brightly colored bougainvillea bushes. If you fall in love with this neighborhood, you’ll be happy to know that some of the houses have been renovated into lovely boutique hotels.

6. Palamut Bükü
This cove is another one of Datça’s famous areas with a beach that is 2.5 km long and beautiful turquoise waters. You can sit under the shade of trees and go swimming in the refreshing waters. The cafes and restaurants in the vicinity are mostly run by local families and are great for an afternoon snack in the sun. If you happen to have a car, make sure to explore the beaches further on such as the Akvarum Koyu and Akçabük.

Datca Almond
The southwest of the Aegean Türkiye has the perfect climate for almond trees. The almond tree gives us two beautiful things. The first thing are its flowers. In February and March, the white flowers of the almond tree dance in the wind on Datca streets. And the second thing are its delicious almond nuts. Try them and you’ll find that you are eating the most delicious and fresh almonds here in Datca.