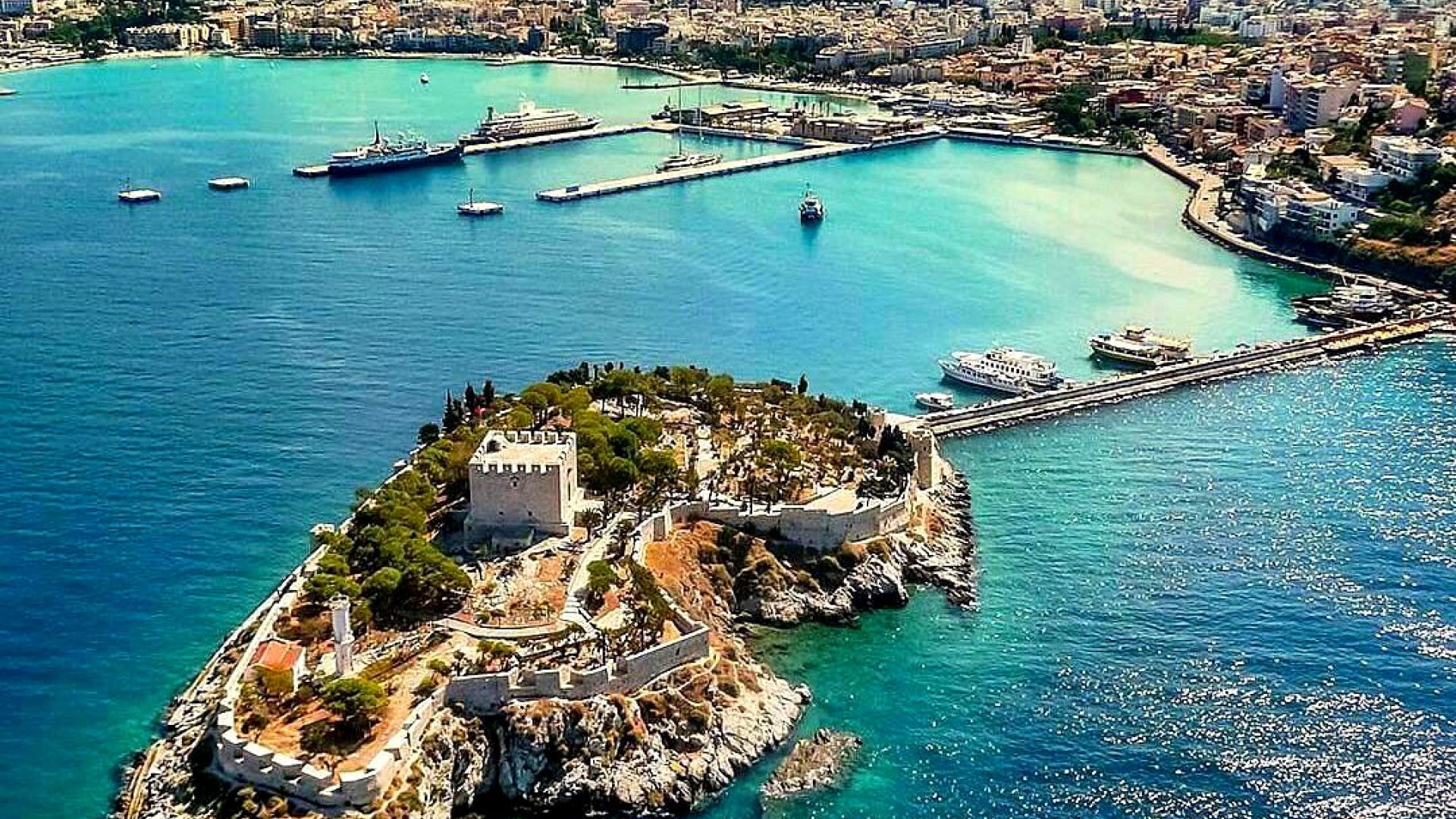 A place where an authentic atmosphere blends the old and the new, spectacular coastal scenery with stunning broad sandy beaches and bright sun, pretty cobbled streets with a large marina, lively cafés tucked away in Ottoman houses with the sounds of buzzing bazaar. As the winds blow through the harbor with a sweet and soft summer breeze, this vivid town welcomes its visitors with open arms.

Situated on Turkey’s west coast, with its trendy beaches and European-style shops and restaurants peppered along the coastline, it is almost hard to believe that this town once was a tiny fishing village. Over the years it has grown into a bustling holiday resort but has successfully managed to preserve much of its character.

Kusadasi is primarily considered as a port town that is frequently visited by cruise ships and packed with European holiday-makers. The town’s most enticing appeal is its prime location with easy access to some of Turkey’s most prominent historical and ancient sites. The Ancient City of Ephesus, including the House of Virgin Mary, Basilica of St. John, and Temple of Artemis draw travelers away from the city, as well as smaller but equally significant historical sites at Priene, Didyma, and Miletus.

Kusadasi takes its name from the Turkish for 'Bird Island', a reference to Pigeon Island, which is connected to the mainland of Kusadasi by a short walkway.

Although little is known about the early history of Kusadasi and its founders, Kusadasi has hosted many different civilizations since ancient times.

The early settlements in Kusadasi were by the Lelegians and Carians who moved from central Anatolia around the year 3000 BC. They established a colony on the outskirts of Pilav Mountain in Kusadasi. A mild climate allowed the inhabitants to grow essential products such as olive, grape, and figs for extracting oil or making wine and sweets on the fertile lands around the city.

In the 10th Century BC 12 Ionian Cities - Samos, Khios, Miletos, Priene, Ephesus, Teos, Erythrai, Priene, Klazonemi, Lebedos, Phokaia, Colophon, Smyrna, were established and were known for the most developed cities of the age. The annual meeting place of the Ionian League, Pannonian, was founded around Kusadasi and the towns of Phygale, Marathesion, and Neopolis were established within the borders of the city.

Persians around the year 546 BC invaded the city.

In 200 BC, Kusadasi and its surroundings were dominated by the Roman Empire. As the climate changes caused severe damages and earthquakes changed the route of Caystros River, Ephesus was mostly destroyed and lost its prior importance. Byzantines then were forced to search for a new port and a new road that would be suitable for trading. Scala Nuova was the name of this new port, which added a new trading center to historical cities such as Ania, Melia, Phygale, and Neopolis, which have created the early foundations of today's Kusadasi.

The castle on the small island was built for observation purposes during the period of Byzantine. The city was surrounded by castle walls as protection against the violence of the pirates, a very common fact in the Mediterranean in those centuries.

By the 15th century, Scala Nuova (meaning New Pier in Italian) was under the domination of the Venetian and Genoese sailors and traders who established consulates here.

Ottoman Empire ruled Kusadasi after 1413. During the reign of the Ottomans, significant new structures were built in Kusadasi. Okuz Mehmet Pasa Caravanserai is the principal legacy of the Ottoman architecture in the city and had been ordered by the man of the same name, who was the vizier during the reigns of Sultan Ahmet I and Osman II. Also, the mosques in the center of Kusadasi and the castle on Pigeon Island are reflecting the architectural style of the era.

After the First World War, Kusadasi was invaded by the Greeks (1919). The city won a long struggle and on September 7th, 1922, and became a part of the Turkish Republic.

While You Are Here

1. Sunbathe on Downtown Beach
Right in the heart of town, Downtown Beach is a manmade stretch tucked between the marina and the harbour. Grab a sun lounger and laze away a day in the sunshine. When you're feeling peckish you can head to the nearby beach bar for a bite to eat. For many, a visit to the beach is one of the top things to do in Kusadasi.

2. Haggle at the Grand Bazaar
You won't want to miss out on the unique atmosphere on the Grand Bazaar; it's an absolute paradise for shoppers. Here you'll find a maze of stalls (there are hundreds of them) selling clothes, leather goods, jewelry and more. When you're ready for a break, stop off for an apple tea and watch the locals go by. And don't forget to bring your best bartering skills along with you; it's expected here.

3. Have a night out
You'll find plenty of lively bars in the old town, centred around the aptly named Bar Street. Whether you fancy hitting a karaoke bar or an Irish pub, you'll find everything you need for a fun night out. If you want to stay out late, you can head for one of the clubs on the waterfront. If you're looking for a quiet evening you'll love the Kale district; it's all about traditional tavernas in this part of town,

4. Spend the day on Ladies Beach
It may be called Ladies Beach, but everyone's welcome to soak up the sunshine here. It's only 15 minutes from Kusadasi, and when you arrive you'll find a 1km stretch with warm, shallow waters that are perfect for paddling. You can also pick up the pace and give water sports a go; banana boats and water-skis are available here.

5. Visit ancient Ephesus
When it comes to Kusadasi excursions, a trip to the ancient city of Ephesus is one of the best around. It's only half an hour down the road from the coast, and it's well worth the trip to see streets lined with classical columns, stunning statues and an impressive amphitheater.